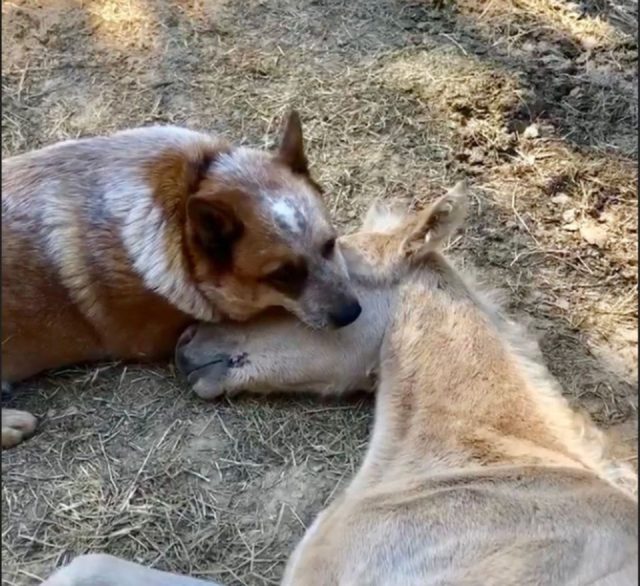 Everybody knows how painful it is to lose someone we love. Nothing can assuage the pain and the tears that keep flowing no matter how much you convince yourself that they’re in a better place.

Thanks to the help and guidance of the people surrounding us, we manage to get through these tough times. Their presence serves as a soothing balm to our longing, replacing the emptiness with warmth.

And, it looks like our furry friends are also capable of stepping up to that role when the opportunity arises.

I’m sorry for your loss, pal.

In the short video clip taken by Karla Swindle, one can see a dog and a foal lying by each other’s side. No one dared make a move until the pooch arose and seemed to look out for its friend.

It turns out; the foal just lost her mother. And, what makes the situation graver is that the filly’s only 12 days old, barely old enough to fend for himself.

So, in an attempt to comfort his new-found friend, the pooch named Zip stayed by the foal’s side. It is as if it’s Zip’s way of telling that he’ll accompany the foal whenever he needs him.

A few seconds pass with no movement coming from either Zip or the foal. Both stayed in their original positions, with Zip looking out protectively for the colt. 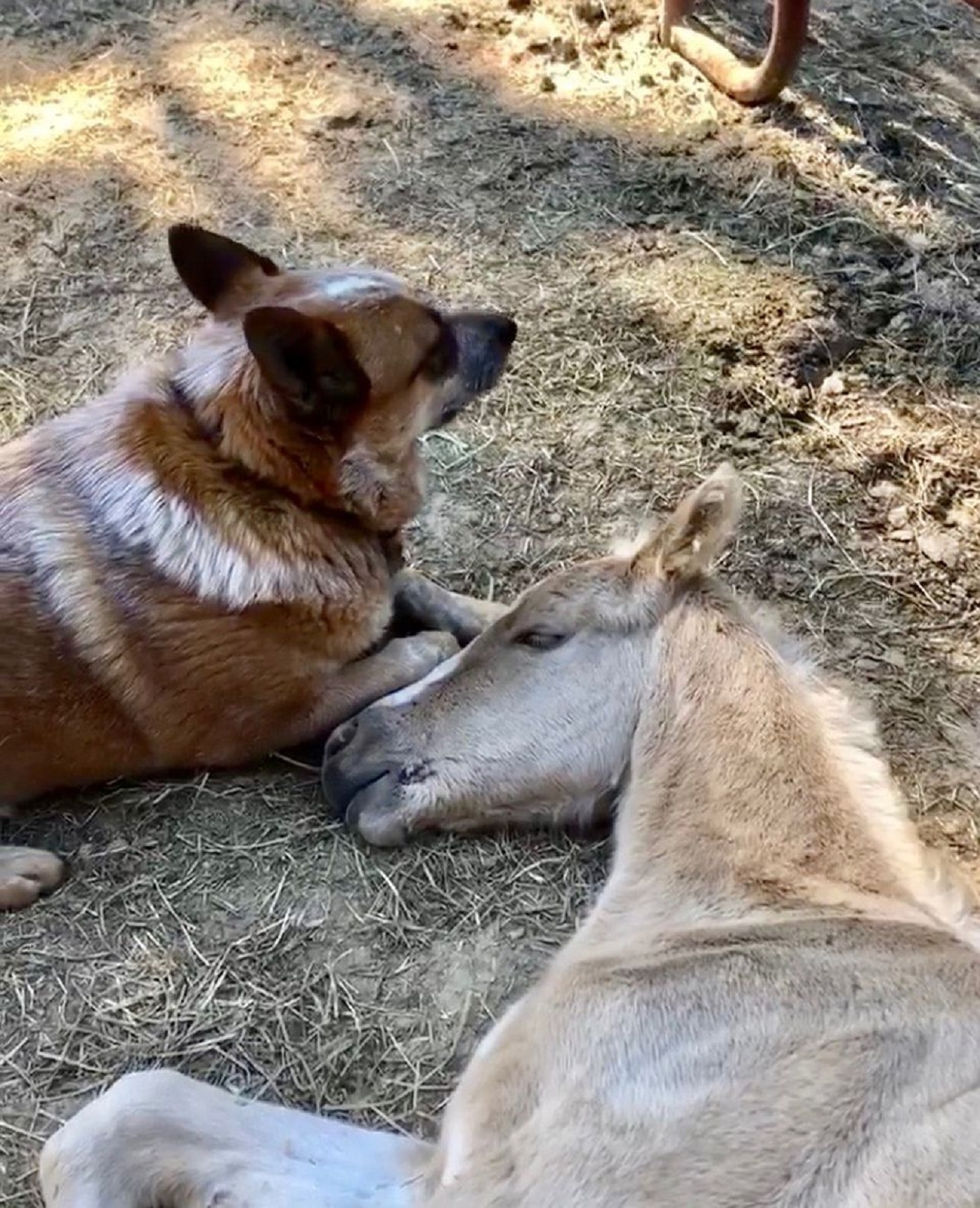 Suddenly, the foal starts to move, but not much. With all the energy the colt can muster, it places its head against Zip’s body. This move ultimately triggered a heartwarming response from the pooch.

Zip immediately places his snout against the foal’s head to comfort the grieving colt. In the end, he rests his entire head on the horse’s head, as if telling it to cry its heart out until there’s no more pain.

From now on, I’ll become your father.

Zip’s sweet gesture continued for a good few seconds, refusing to stop at any moment.

According to Karla, this is the first time that she saw Zip interacting intimately with a horse. Though the pooch’s used to the horses’ presence, this is the only time she could recall Zip taking on the lead in caring and comforting a newly-orphaned foal. 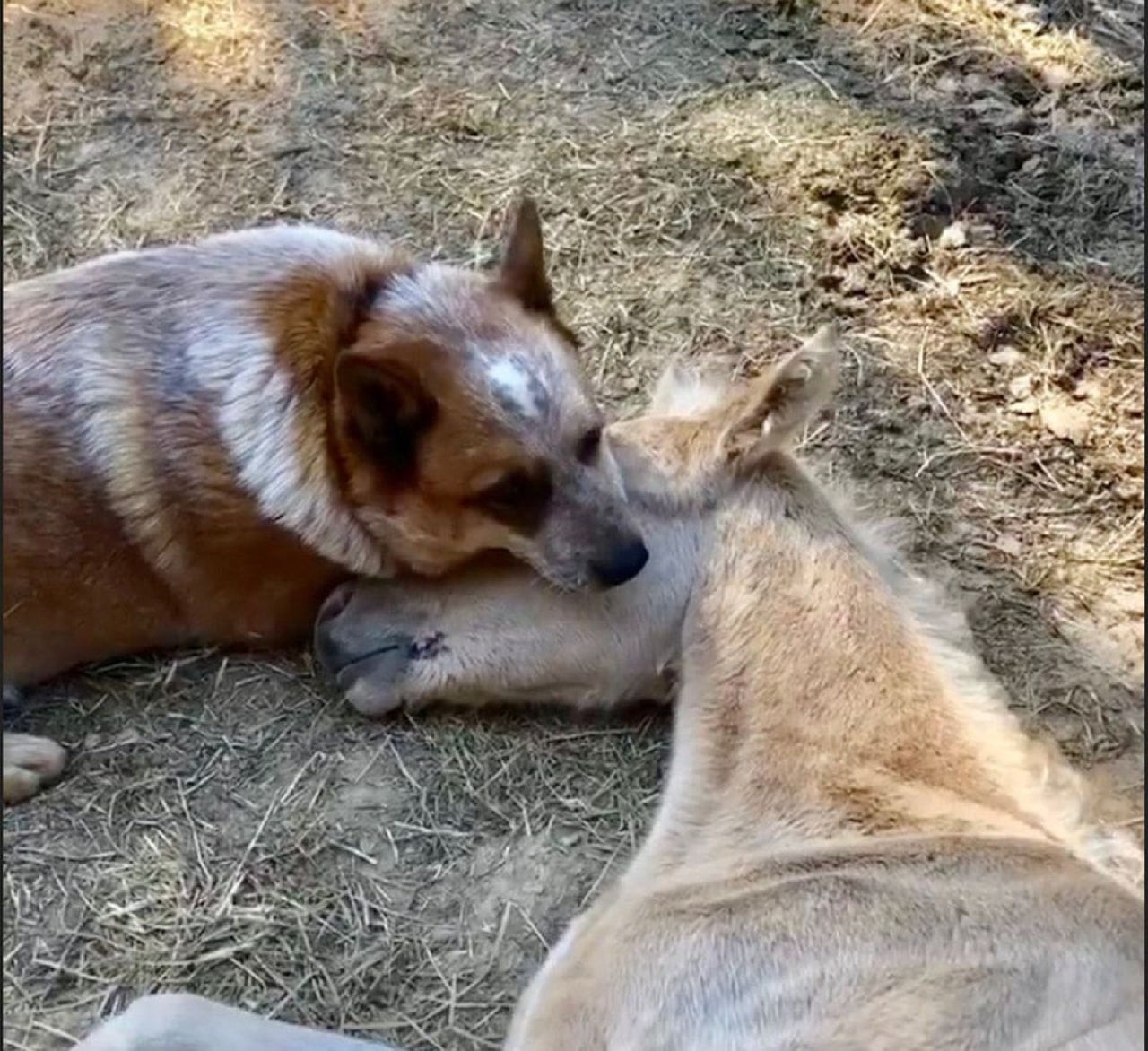 By the looks of it, Zip’s officially assigned himself as the foal’s foster father. And he’ll continue to adopt this role until the foal needs the pooch’s support.

If you want to go out and watch the story that made Zip and the foal’s relationship viral, feel free to watch the short video below.