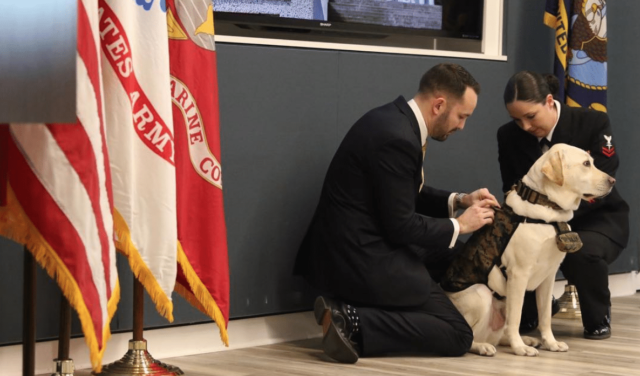 After serving well his former master, ex-United States President George H.W  Bush, Sully, the wonder dog, takes on a new role – a role similar to his previous job but will surely be a challenge.

Sully’s primary task is that of a hospital corpsman second class, whose job includes assisting in the prevention and treatment of an injured officer and assisting medical officers in giving medical care to naval officers and their families.

In a ceremony streamed live via Facebook video, Sully was designated the rank of hospital corpsman second class in front of his new home at the military academy.

In an earlier interview Sully’s trainer, Valerie Cramer bared that it was one of former President Bush’s wish that Sully is deployed to serve other older veterans. Cramer lauds Sully for being calm, smart, loyal, and adaptable to any environment he was put into.

Sully became famous in the public’s eye when a photo of him staying beside the former president’s casket made rounds on social media. With the caption “Mission Complete,” the photo caught the attention of many social media users and lauded the dog for his loyalty to his master.

Now almost three years old, Sully will be joined by seven other dogs at the facility center in Maryland to carry out their mandate not only to help ailing veterans but also be of service to the country. Their contracts require them to work a total of 200 hours per month.

In an Instagram post, meanwhile, Sully said that he looks forward in continuing the mission to serve veterans as what his late master wants him to do.

“Today I became an official Facility Dog – HM2 Petty Officer. It’s an honor and privilege to join a wonderful group of dogs,” he wrote.

For her part, Jenna Bush Hagger, the late president’s granddaughter, is confident that Sully will deliver his job well just like what he did with her grandfather.

Sully will go on to spread his love at Walter Reed Hospital. He was a loving companion when my Gampy needed him most. My girls adored him—and wanted a final goodbye… https://t.co/8E9HZL6bxM

All the best on your new journey, Sully!

This story was inspired by the story published in Washington Post.