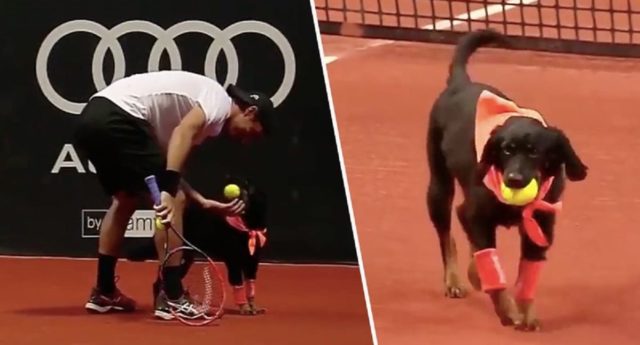 The life of a shelter dog is not exactly ideal, and for some of them, they had been waiting for years to get adopted. I know it’s sad, but shelters don’t usually have a lot of money to do some commercials to showcase all of them.

Aside from staying inside their kennels, these dogs don’t get much attention and exercise they need. Most of the human activities don’t involve dogs in the shelter. There are some, but it’s not a lot, only a handful of activities; mostly a caravan showcasing them to get adopted.

Once in a while there some event organizers who are animal lovers, and devoted to finding our furry friends a loving home. One of which was at the Brazilian Tennis Open, held at Sao Paulo, Brazil.

Back in 2016 with the help of a pet food company, Premier Pet, helped some shelter dogs find a new home with them as ball boys for the tennis tournament.

The dogs are well-behaved and did a great job retrieving the balls for the players. They were all dressed in scarves and sweatband, all geared up to look the part during the tournament. There were four dogs that were used as ball retriever during the game, and all of them found a loving home after the tournament.

The event was a huge success, that last year 2018; they chose six dogs to retrieve the ball for warm up practice during the semi-finals and the finals.

We are just glad that there are companies that care for our furry friends in the shelter. One event wouldn’t be enough, but I hope that their idea would spark a trend and include our shelter dogs in the future.

Thanks to our friends over at Brasil Open for sharing with us the original story.