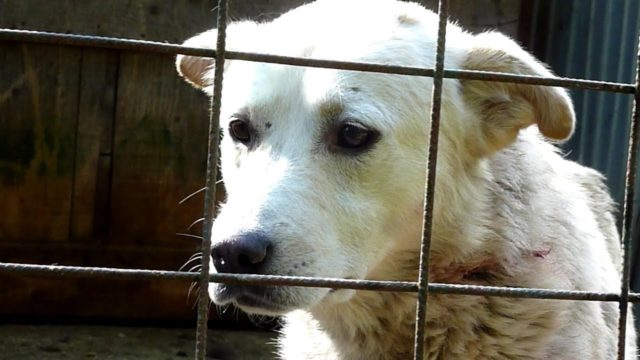 Arkin has spent all his life in the public shelter. He was heartbroken, hopeless, wounded, and was suffering from flea infestation when Howl Of A Dog organization rescued him.

When the rescue staff visited him, Arkin did not seem to realize that they were there to save him. He got so used to being ignored that he barely responded to the rescuers- no barking, no whining. Arkin seems to have lost all hope that someone would ever get him out of the horrible place he grew up in.

Arkin silently cried inside and hoped to be heard, but only the willing heart will hear this dog’s cries. Luckily, Howl Of A Dog came to the rescue and made way for Arkin’s beautiful transformation.

He was taken to the vet and given proper medical care. After his much needed medicated bath, his flea infestation got better, and his personality slowly started to shine through.

Arkin became very comfortable with people, and he enjoys cuddles very much. While he was at the care of Howl Of A Dog organization, he was always taken out for walks and enjoyed the company of other dogs.

Although Arkin was well taken cared of, he still longed to be a part of a family that he can call his own. He was set up for adoption, and the organization facilitated international adoption for those interested to take Arkin in.

Luck seems to be at Arkin’s side when he found an adoptive family from the United States of America. Arkin’s new home is in a beautiful region in New Hampshire, with lots of attractions for Arkin to explore with his new family.

New Hampshire has lots of forests, lakes, and hiking trails in the mountains. Arkin already went for his first hike, and he was so excited that he could not figure out what he wanted to do first. His family is delighted to have him around. Everyone who got to meet Arkin could not believe how well-behaved he is.

It is wonderful to have kind families who give loving homes to fur babies like Arkin. His cries for help have now turned to smiles and joy. Now Arkin is truly living the best life ever!