Home Pup Insider Man Burst In Tears After Strangers Pulled Up His Dog From Fox... 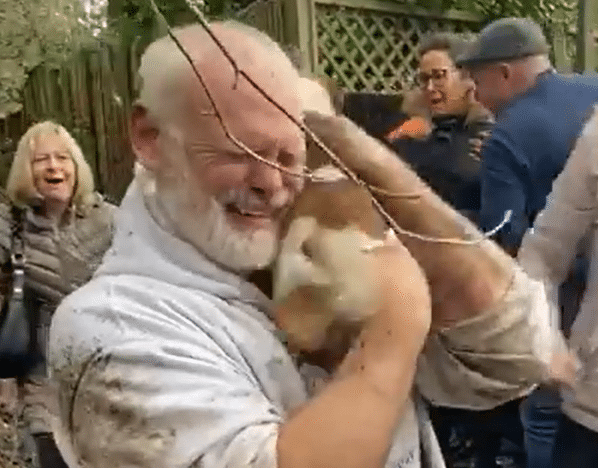 Losing a pet can be heartbreaking. So when a man named Alan Whitton found out that his one-year-old Jack Russell terrier, Mitzi, had gone missing, it was a nightmare for him. Good thing, some strangers stepped up to help bring his beloved pet back to him.

It all happened one morning when Whitton decided to take Mitzi out for a walk. Nothing could have gone wrong if it wasn’t for the big dog that they encountered along the road. Mitzi got intimidated by the big dog, so she ran away, leaving her owner behind.

Whitton was not able to catch up with Mitzi, so when he completely lost sight of her, he searched for her everywhere. When his efforts to find her were futile, he decided to post about her on social media in the hope that his friends or neighbors might have come across his beloved pet. Several people within his community saw his post and offered their help.

It didn’t take long for another dog owner to figure out where Whitton’s missing dog might be. He was out with his two dogs when he noticed his pups sniffing around a fox hole for quite some time. With the thought of Mitzi probably hiding inside, he contacted Whitton to let him know about it.

Whitton had a strong feeling that it was Mitzy, so he brought Mitzi’s favorite toy as he rushed towards the strangers who found her. Once he arrived at the location, he immediately squeaked the toy to see if the dog inside would react. A moment later, he heard her whimpers in response and knew right then and there that it was indeed his most beloved pet.

Whitton and the people around him wasted no time and got down on the ground to pull Mitzi out of the fox hole. Soon, she was able to get out and leaped into his father’s arms. Their reunion was caught in a video, and it was the sweetest thing ever.

The owner couldn’t help but burst into tears as he held Mitzi close to him. Thanks to these good Samaritans, his little puppy was back safe and sound.

Ever seen a grown man cry?