It is inevitable that a man can experience love at first to a dog he or she just recently encountered and stumbled upon. Dog lovers for sure can’t take away their penchant for dogs even they have something different in mind during their first meeting.

This is what exactly happened to a man, who happened to be on a trip for a cross-country escapade in Colorado. During one of his hiking trail, the man found a dog who looked missing. The dog had some bruises on her knee.

This made Matthew Glatz decide to take the dog to a local humane society for treatment. He then continued with his escapade. His heart, however, felt something on the dog as if it pushed him to go back and adopt the dog for good.

Born and raised in Portland, Maine, Glatz shared how he first encountered the dog whom he named Amelia. According to the traveler, he was on his way to hike the trail at Powder Canyon in Northern Colorado when he noticed the injured the dog.

Up above the 200 yards hike, Glatz saw the injured dog alone. He recalled that Amelia during that state was malnourished and scared. It was then he decided to bring the pooch to the Colorado State University’s veterinary clinic for a check-up.

Dr. Margaret Garcia, the veterinarian who checked on Amelia, said the pet had a non-healing wound on her face and several heartworms. They were able to quell the spread of such through continuous medication for months. 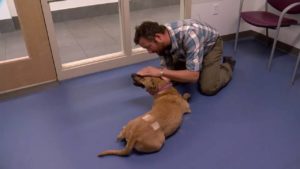 After overcoming the trail he had for himself, Glatz decided to go back to the veterinary clinic and asked about Amelia. He was ready to adopt the dog.

The man drove from California to Loveland for the scheduled reunion. Glatz said he would take care of Amelia and once she gets enough strength, he will train the dog so that Amelia could join him in his future travels.