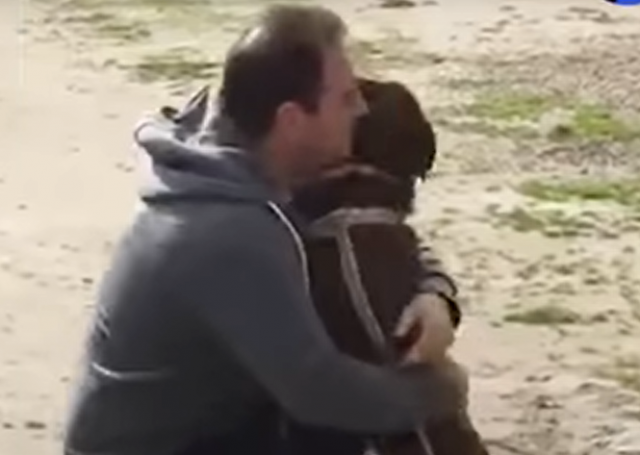 It’s always heartbreaking for an owner to lose a pet. It’s even more tragic when that pet was treated like family.

This man lost his precious dog three years ago. Pakita’s father has been looking for her but had no luck. He looked for her everywhere.

The man moved on with his life, but he never forgot about his dog, Pakita. This man did not see his precious dog again until one fateful day. He finally found her. He found out where Pakita has been living.

Pakita has been living in a shelter all this time. When they were finally brought to meet, Pakita was hesitant at first. She did not seem to recognize her dad. Three years is a long time, and nobody expected her even to remember him.

Her dad watched her for a little while. He was savoring the moment that Pakita is finally in front of him. Pakita finally went to her dad and started to sniff him.

Her reaction when she recognized him was priceless. Pakita started jumping on him and kissing him as soon as she realized who it was. Pakita was wagging her tail non-stop. Her father could not believe that Pakita still recognized him.

It was such a heartfelt moment as everyone was very emotional. Everybody was so happy for the two of them. It was like a scene in a movie.

Those who witnessed the reunion between the two will always remember that moment. Pakita and her dad missed so many moments together. Pakita has missed all the belly rubs and all the cuddles that his dad used to give her. They now have three years’ worth of cuddles to make up for.

Seeing Pakita so excited about meeting her father again was one of the best scenes anyone could ever see. There is so much love between the two.

Too much time was lost. After three long years, Pakita finally found her father. They will never be apart ever again.