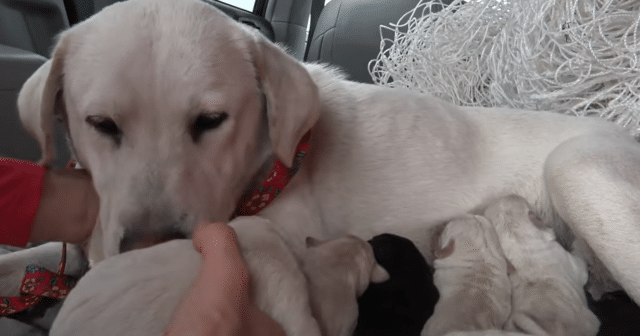 Mothers have protective instincts. They guard their young against lurking predators. Whether human or animal,  mothers are excellent at protecting their young even at the cost of their lives.

In a heroic animal rescue video in California, a team of Hope for Paws rescuers attempted to get a new mom dog and her seven puppies out of the street.

Hope for Paws, an animal rescue foundation, received a call one day. A concerned citizen fed the pack of stray dogs in their neighborhood. She noticed that one dog appeared to be very pregnant, so she decided to call the rescuers.

The next day, the team immediately headed to the scene and located the dogs. They found three dogs – a Rottweiler, a Pitbull, and the reported pregnant Labrador. With collaborated effort, they introduced dog food and cheeseburger to the dogs and tried to put a leash on them.

The reported pregnant Labrador didn’t appear pregnant anymore, so the team searched the vicinity for signs of puppies. They played the sound of crying puppies so the dogs would lead them to the place where they hid the litter. The smart Labrador mom guarded the wrong place to trick the rescuers and divert their attention away from her offsprings.

Moments later, they finally spotted the exact location where she hid her puppies. One by one, Eldad, the team leader, lifted the puppies and handed them to his teammates. They brought along a cage with a blanket and pulled out seven newborn puppies and secured them inside it.

Together with the Labrador, the rescuers transported the litter to the shelter. They named the mother Labrador, Amazon, for they found her in the bushes.

Meanwhile, rescuing the other two male dogs took them quite a while before they could capture them. Afterwards, they called the Rottweiler Bear and named the Pitbull Juniper. The animal shelter immediately fed them and gave them veterinary care.

Watch the heroic video documentation of their rescue mission here: