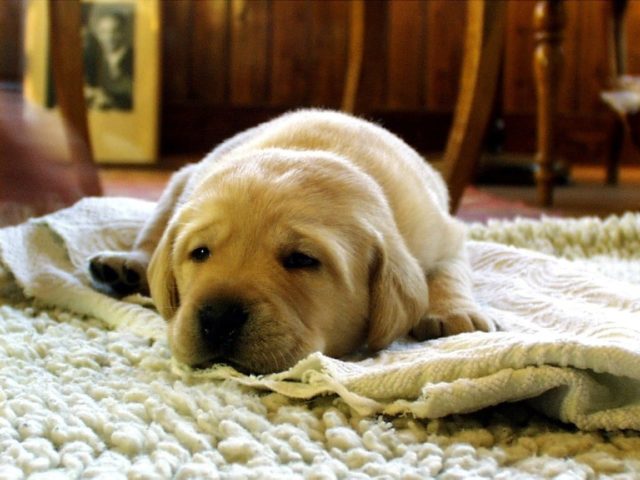 When your new home happens to be your old one, it can be the best feeling ever! The familiarity of it all, the comfort and security that comes along with it could make it the perfect home for a canine. Smudge grew up trained to be a dog for the blind.

His trainer, Deana, had her since she was only a few weeks old. She got this very distinctive birthmark on him that they named him Smudge. She was trained in Deana’s home for a few years before she was brought to the Guide Dog Foundation.

She even got to mentor another lab named Camden. Smudge showed Camden what she knows. When Smudge was ready, she left Deana’s home to be trained further in the foundation and Deana kept tabs on her.

Deana heard that she was doing great in training and as her first trainer, she is ber proud. The time came when Smudge developed a minor health issue where she is no longer able to serve as a guide dog but is perfect to be a family dog.

Her former trainer, Deana, decided to adopt her and have her retire with family. It is the perfect set up! She grew up with the people that will be officially adopting her.

When she was brought home, she even recognized Deana’s daughter Leah as they have bonded over the years as well. Of course, Camden was there to greet her. The two have reunited.

Now, they have all the time in the world to play. Smudge is described by her mother as a loving dog and even have a motherly side to her when it comes to Camden, which is very sweet.

Smudge loves to love and be loved. Smudge is finally in her forever home where she gets all of that and more.