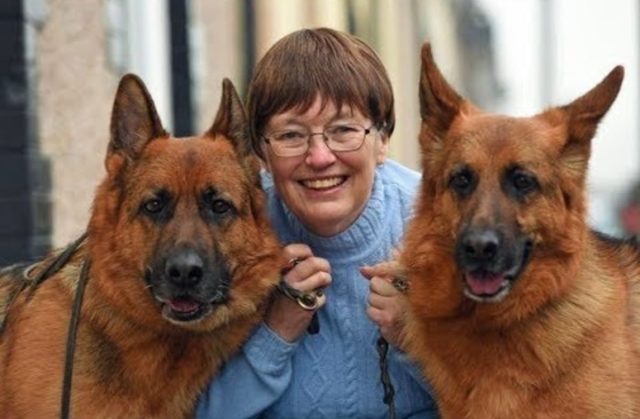 Dogs have this incredible ability to detect things that a human can’t. They also have a better instinct when it comes to judging whether there is something wrong going on or not. These amazing talents were put to good use by two German Shepherds when their owner needed it the most.

Linda Munkley only started becoming concerned about her health after her two German Shepherds, Enya and Bea, alerted her that something might be wrong with her. This all began when the two doggies suddenly acted strange when they were around her. They kept on butting their heads against Linda’s chest and sniffing the area. At first, Linda did not mind it, but after weeks of this continuous urging, she finally decided to check what was wrong.

The first few times she checked her chest for any lumps; there was nothing there that she could feel. However, the dogs continued sniffing and butting at her chest. After two months of this, Linda noticed that the pooches were focusing on a particular area of her breast. That was the same spot where she discovered that she had a lump in.

Once Linda found the lump that her doggies were alerting her about, she wasted no time in getting it checked by the doctors. The bump she felt turned out to be a fast-growing form of breast cancer. It took months of chemotherapy and some surgery, but Linda was able to beat cancer. Thanks to her dogs Enya and Bea, she was made to keep on checking her chest and was able to find the lump early enough to treat it properly.

Whether it is the intuition of the doggies who felt that their owner was sick or their amazing sense of smell that sniffed out the disease, these two pooches were able to save their human’s life. They are a great example to show that dogs can protect us from even the most undetectable harms.