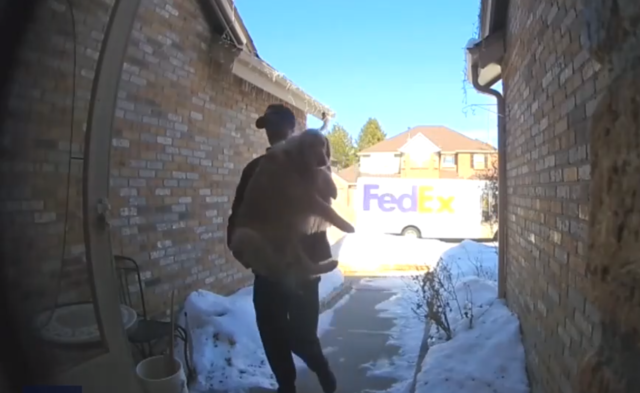 Lisa Menzies was out of town when Catcher, her three-year-old golden retriever, decided to go on a solo escapade. Catcher slipped into the outside world when the front door of their house in Castle Pines, Colorado, was blown open by a breeze.

According to Lisa, they were doing some repairs in their house at that time. Their contractor went out on lunch and shut their front door. When the wind blew, the door got opened. Catcher took advantage of this and escaped.

The doorbell camera footage of their home showed Catcher wandering toward their front lawn. Lisa said that the curious dog could have gone out to the busy road, and who knows what could have happened. Fortunately, a Good Samaritan spotted the lost pup before further trouble occurred.

The FedEx driver contacted Lisa, saying that he found her dog. He told her that he would take Catcher to the address on his collar. Then, the man brought the pup back into the house with so much care. The security camera captured that special delivery moment.

In the footage, the FedEx driver was seen carefully carrying Catching toward the front door. According to Lisa, witnessing the man carry her dog like that made her think of the Titanic theme song. He showed so much care and love that made Lisa feel very amused.

Now that Catcher is back into the safety of their home, Lisa has nothing but appreciation for the Good Samaritan, whose name she still does not know. Lisa is very grateful for the man who chose to interrupt his day and his package delivery schedule to pick up her beloved Catcher and hand-carry the pup into their home. He even ensured to lock the door when he left. According to Lisa, the FedEx employee is certainly their family’s hero.