Home Pup Insider Dog Puts Alarm On Toy Box So No One Can Steal His... 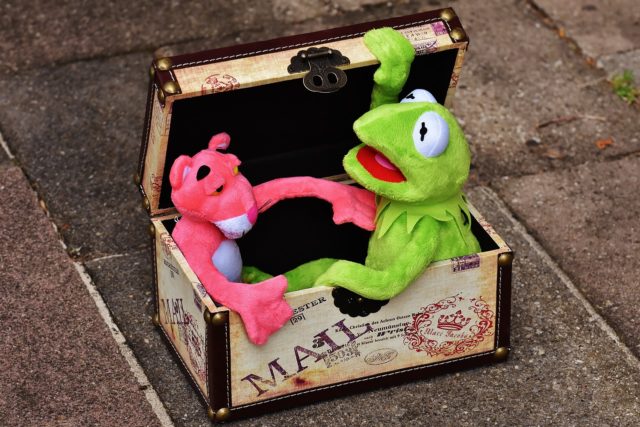 Key, a super smart Siberian Husky, has lots of toys. He has all sorts: an assortment of plushies, several balls, and even a rubber chicken. He has so many that his owner mentioned the possibility of donating some of them.

Donating? You mean, give my toys away?

Some of the toys were sent to the Animal Rescue Center so that other less-fortunate pets can have toys of their own. Apparently, Key wasn’t too keen on sharing his playthings, even if they were stuff he rarely uses.

One day, Key’s owner discovered something rather amusing. The innovative Husky arranged the items on his toy box in a most peculiar way. Whenever a hand reaches into the box, motion and pressure activated toys would sound in unison. Upon hearing the alarm, Key would suddenly barge into his room and stare at the intruder accusingly. Then he proceeds to check if any of his toys are missing.

The next day, her owner reaches into the toy box yet again. Several toy wolves howl. A gunshot, a siren.  A croaking frog and a really noisy rooster going cock-a-doodle-doo! Key trots to the room and catches the thief in action.

Key’s owner is charmed by the fact that her dog is a genius, but they need to sit down and talk about sharing.

“Do you like sharing your toys?” Yes, he grunts (Well, this is something new).

“I’ve seen you share your toys before,” she then recounted how Key was a good boy, and if it would be alright if he can share more of his toys to the Animal Center.

Did Key agree to share more toys to the Animal Rescue Center? Find out in this heartwarming video: