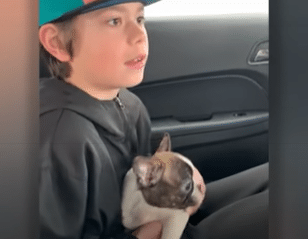 Thirteen-year-old Logan is celebrating his birthday without his dad for the first time. His father died of multiple myeloma cancer just five days before his birthday, so he is not expecting anything exciting this year.

But Joe, Logan’s father, had something special in mind before he died. He knew his son had always wanted to have a pet dog, but he could not get him one earlier because he was allergic to it. So he told his wife, Melanie, to give Logan a puppy once he passed away.

Melanie got Logan the perfect puppy – a healthy little Boston Terrier – with the help of his nephew, Jon. And on Logan’s birthday, together they execute Joe’s plan. Logan is clueless the whole time about his late father’s surprise.

The family drives north from their home in Michigan to collect the puppy. Logan has no idea that the puppy is actually for him. He only learns the truth when they’re on their way home, and he couldn’t believe it.

In the video, Logan looks surprised when Joe tells him that the puppy is from his late father. He’s confused for a while, but when the truth sinks in, he starts crying and holds the puppy closer to him.

Logan is ecstatic to receive such a priceless birthday gift from his dad. He may have lost him a few days before his birthday, but he knows in his heart that he’ll always be there in spirit. He names his new best friend Indy, and he looks forward to more exciting days with him.

Mission accomplished for Melanie and Jon – and of course, for Joe, who orchestrated it all. Indy will serve as a constant reminder of just how much he loved his son Logan.

Watch the emotional video below.