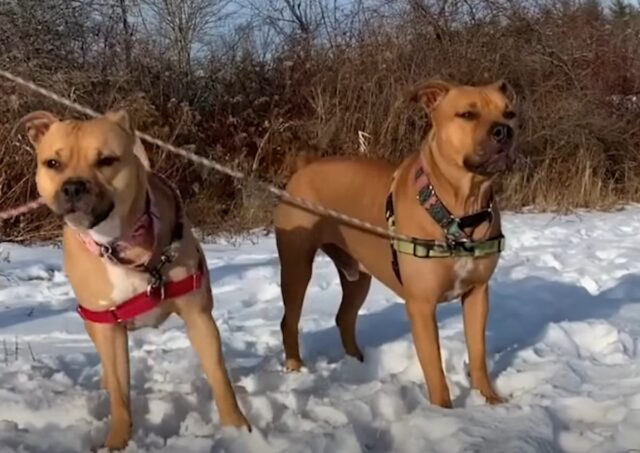 Moose, Nala, and their seven puppies were abandoned at the Pope Memorial Humane Society shelter. The Pit Bulls’ pups quickly got adopted, but Moose and Nala still have not found their fur-ever homes.

Moose and Nala have been living at the shelter together for over six months, but no one showed any interest in adopting them. Emily, the founder of Shelter A Day, heard the two bonded Pit Bull’s story, so she decided to spend a few days with the Pitties at the facility to know why they have not been adopted yet.

Emily shared that most potential dog adopters are often overwhelmed by Pit Bulls because of how big, muscular, loud, and hard they play. Emily said that people are intimidated by the Pittie’s noisy grunts, but they do not understand that it is just who the pups are.

Emily said that Moose and Nala are two playful, loving, Pit Bulls who want nothing but all the attention. Emily shared how bonded Moose and Nala were because they do so well together.

Emily believes that older dogs like Moose and Nala are often overlooked because most people want to experience their pet’s adorable puppy stage. However, Emily said that Moose and Nala still act like a pup because they want to be babied most of the time.

Emily shared that Moose and Nala were eventually adopted together. Emily said that she is glad that they are in the same home and will never be separated from one another.