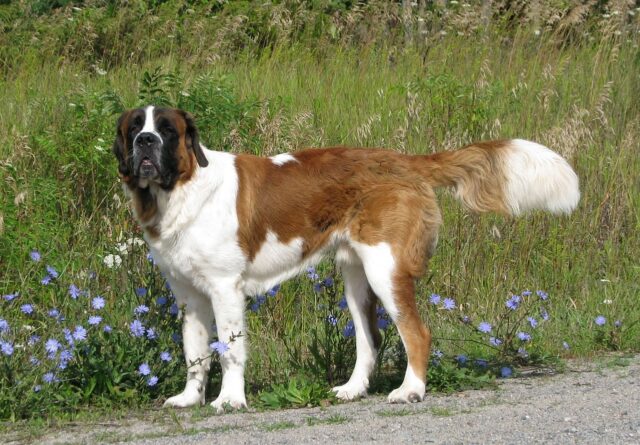 However, there are also who prefer large dog breeds because they want dogs to be huggable. Large dog breeds also give a tough impression to strangers.

His breeder surrendered one Saint Bernard dog in Nebraska for unknown reasons, but he was immediately adopted by someone from the other side of the country!

Cosmo is a 130-pound Saint Bernard dog who was surrendered by his breeder in Nebraska. The Hearts United for Animals shelter staff wonder why the breeder has to give away this sweet and loving fur giant.

The staff believes that Cosmo deserves a loving home, so they posted his profile on a pet adoption site.

Luckily, one woman got interested in bringing Cosmo home. However, her family is living on the other side of the country. She is living in upstate New York.

Jayne is determined to bring Cosmo to New York. However, it is costly to get the giant dog via airplane, so she decided to drive from Nebraska to New York! It’s a 1,300-mile road trip for Cosmo!

Jayne arrived in Nebraska via an airplane. She rented a car to go to the Hearts United for Animals shelter to pick Cosmo.

The shelter staff is crying happy tears for Cosmo. They’ll miss Cosmo, but at the same time, they are also delighted for the gentle giant that he would be taken care of by the right family.

When they are about to leave the shelter, Cosmo is a bit hesitant to ride the car. It took Jayne a few minutes to convince the dog to get inside the vehicle.

Jayne made sure that Cosmo would be comfortable during the road trip. They would even make occasional stops to feed Cosmo and to let him do numbers 1 and 2.

As soon as Jane and Cosmo arrived in New York, Cosmo was greeted by Jayne’s two other dogs, Poppy and Grendel.

In the video below, notice that Cosmo is curious about his new home. He even drank water from the toilet bowl, haha.

Jayne’s family is glad to welcome Cosmo in their family. More adventures for you, Cosmo!